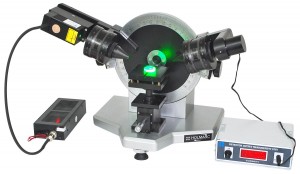 Ellipsometry is a very sensitive optical technique which provides unequaled capabilities for thin film metrology. Ellipsometry exploits phase information and polarization state of light and so can achieve angstrom level resolution. The main advantages of ellipsometry are its non-destructive character, high sensitivity and wide measurement range. The optical parameters like thickness and refractive indices of a thin film can be determined precisely by this technique.

In the ellipsometer model no: HO-ED-P-06, an elliptically polarized light is made incident on the test substrate and the reflected light which is linearly polarized is analyzed for polarization changes.

The instrument consists of two concentrically rotating arms around a precisely graduated disc fixed to a heavy base. A laser source is held on one arm and the detector assembly on the other arm. The graduated disc has 1 scale and 0.1 resolution achieved through a vernier. Power supplies for laser source and detector are placed separately. Polarizer, analyzer and quarter waveplate are held in precision rotary stages in the optical path with precise graduations having 0-360 range and 0.1 resolution. Glan-Thompson Prisms are used for both polarizer and analyzer. Sample is placed on a precision micrometer driven vertical stage with height adjustment range of 10 mm and resolution 0.01 mm. Incident angle for laser source can be adjusted between 30 and 90 . For null method, detector can be replaced with a miniature screen for visual determination of null point, if required. 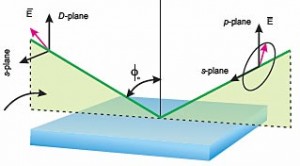 ► Non-destructive and non-contact technique
► Analysis of single and multilayer samples
► Accurate measurements of ultra-thin films
► Software for measurement, modeling and
automatic operations.
► All range of (Ψ, Δ) can be measured.
► Uniform measurement sensitivity for (Ψ, Δ)

Where Ψ and Δ are the amplitude ratio and phase shift of the p and s components respectively. Since ellipsometry is measuring the ratio of two values, it is very accurate and reproducible.

Ellipsometry is a highly sensitive technique for thin film analysis. The principle relies on the changes of the polarization state of light when reflecting from a surface. To characterize the polarization state, corresponding to the direction of the electric filed of the electromagnetic wave; two directions are chosen as reference, p-direction (parallel) and s-direction (perpendicular). The reflected light has phase changes that are different for p-direction and s-direction. Ellipsometry measure this state of polarization;
p = rp / rs = tan Ψe iΔ